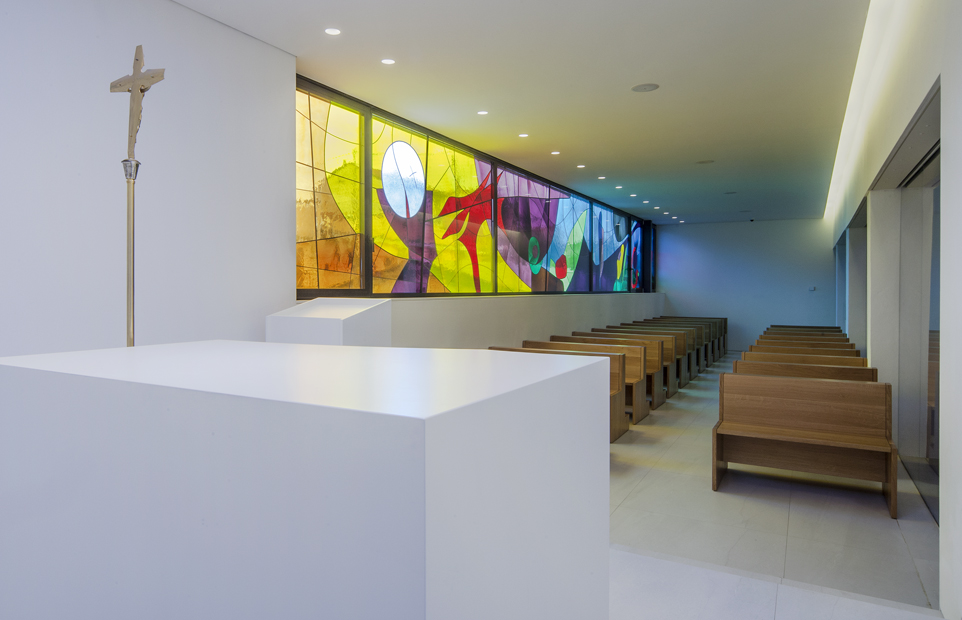 The study of the sacred space is a topic of the design research that has been developed in various projects based in Turin, tracing an evolutionary path over the last years.

Since degree thesis in 1998, entitled: “Mistic Space: project for a new church in the outskirt of Turin”, and after collaboration with father Costantino Ruggeri in Pavia, Giorgio Comoglio developped a personal research with his office to deal with liturgical space, in numerous works including restoration, restyling and extensions, including the construction of several weekday chapels.

Studio Comoglio works are characterized by the accuracy and attention to each elements forming the sacred space, and to the interactions between parts: liturgical elements of the presbytery, functional furnishings like benches, stainless glass insertion, interaction between natural and artificial light, all these aspects are related features concurring to the final result.

Very restricted space as weekday chapels, assume a complex and complete nature. Liturgical spaces by studio Comoglio are places for prayer where emerges the intimistic aspect of space dedicated to contemplation and introspection, determinating a break from everyday life and from the urban environment;  a place where the color of the stained glass on the wraparound white, receive the faithful and isolate him in a quiet microcosm.

Other  aspect studio Comoglio deals with are the renovation and conversion of existing liturgical spaces, in order to give a new shape and regenerate space for celebrations. For example the complete restyling of Santa Caterina da Siena Church, or the extension in Santa Maria Goretti Church, led to revise the role of the presbitery, through the rearrangement and different disposal of liturgical elements, renewing the centrality and characther  to the focus of the celebration. All unnecessary and decorative elements are avoided to not affect the whole perception.

Comoglio architects participated in national and international competition regarding this theme, as the contest for a new Parish center in Lamezia Terme.  New design solutions for the liturgical spaces and the auxiliary services where pursued, as well as for the exterior spaces and interactions with urban landscape.